There is a large number of churches and holy pilgrimages on mountain Olympus, all of which are very interesting both to travellers but also to the pilgrims who would like to tour the religious sights of the region. Some of them date back to the 11th century. The traveller who visits mountain Olympus, realises that the mountain is a unique place with a tradition of many centuries.

This is one of the most famous and historical monasteries of mountain Olympus. The old monastery of Agios Dionysios is located at a distance of 17km from Litochoro, at an altitude of 830m, inside the Enipeas gorge. Agios Dionysios, a monk who lived in a nearby cave, founded the monastery in 1542 and dedicated it to the Holy Trinity. As a patriarchal and stavropegial monastery, it holds special privileges from the Patriarchate. During the years of the Turkish domination, the monastery served as a spiritual beacon, with its rich library and its manuscript copying workshop, while the monks participated actively in the Greek Revolution of 1821, as well as in the Revolution of Olympus in 1878, providing shelter to the women and children of Litochoro. 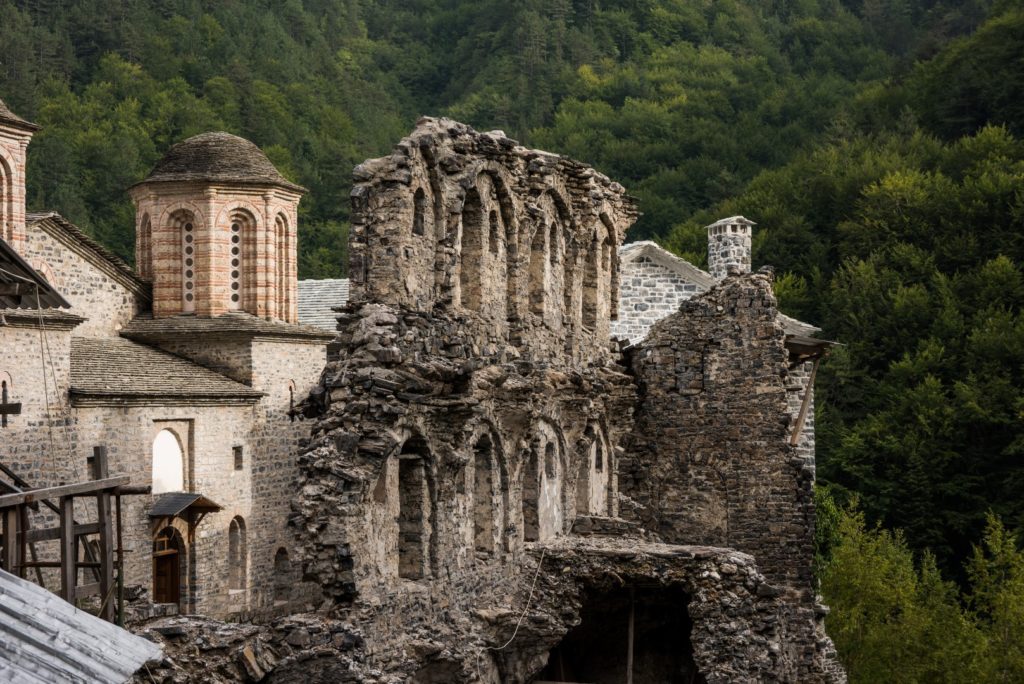 During the Greek fight for Macedonia, the monastery was once again a refuge and a hub of resistance for the Greek fighters. Having been a hiding place of the Resistance during the German occupation, the monastery was blown up by the Nazis in 1941, while in 1943 it was bombarded and almost destroyed. Today the old Catholicon, as well as a large number of buildings, have been restored. The grave of Agios Dionysios lies inside the restored Catholicon of the monastery. 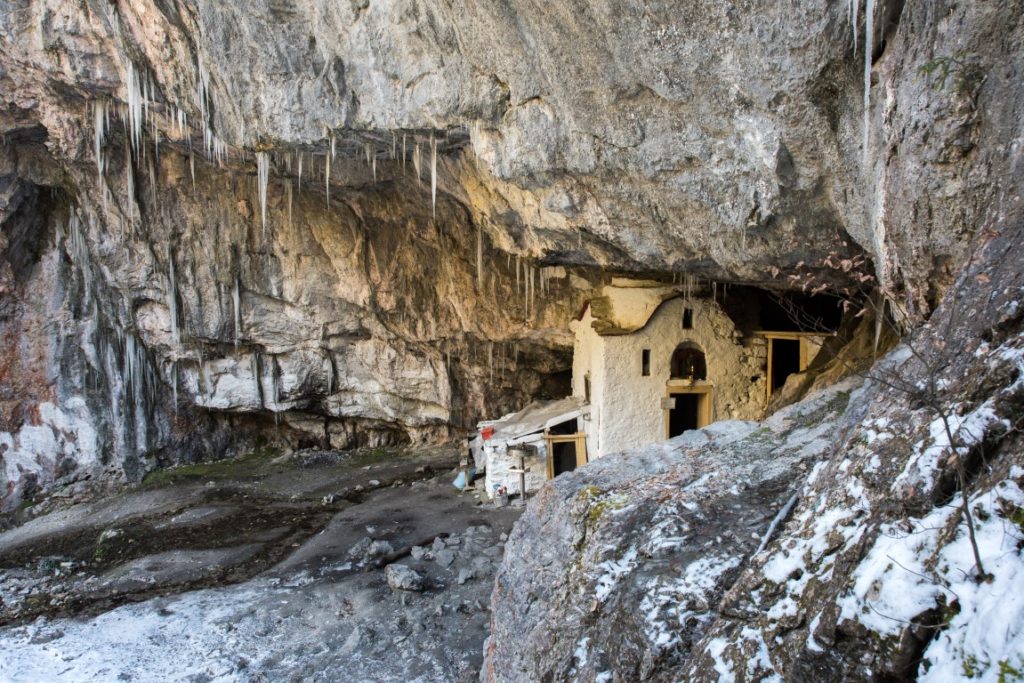 Half an hour away from the monastery, following a magnificent route, you come across the Holy Cave (Agion Spilaion) of Agios Dionysios, where there is also a holy water spring. This place is an attraction for crowds of visitors.

In 1950, the monastery was moved to a lower location, the Metohion, which is located 3km from Litochoro. This is the new Holy Monastery of Agios Dionysios (Nea Moni). A brotherhood of twenty four monks abide in the new monastery, following the tradition of the Holy Mountain. They receive many visitors throughout the year and have developed great spiritual and charitable activity. The monastery has an interesting Sacristy (Ecclesiastical Byzantine Museum), which was established by the Ecumenical Patriarch Bartholomew. A collection of many valuable heirlooms is kept there. In addition, the monks practice organic farming and produce delicious organic products such as dairy, honey, eggs, etc. 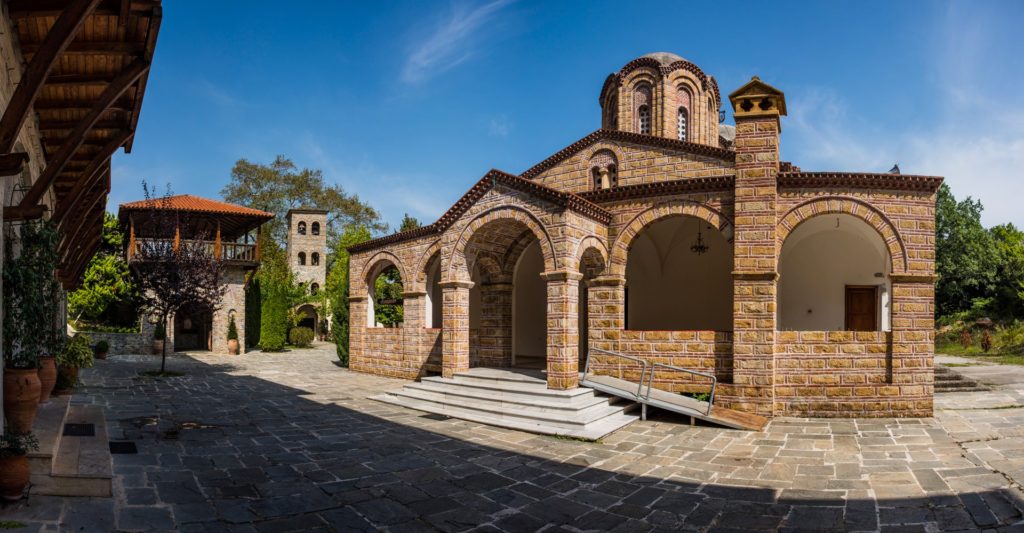 The new monastery is open from sunrise to sunset and is easy to access from Litochoro. The monastery celebrates on the 23rd of January, commemorating Agios Dionysios of Olympus.

On the southwest side of mountain Olympus, at the mouth of the “Mavratzas – Sparmos” gorge and into a forested area, at an altitude of 1.020m, lies the monastery of Sparmos. The monastery was built in the 14th century and is dedicated to the Holy Trinity. In the 16th century, it came under the Patriarchate as a Stavropegial monastery, while in the 18th century it prospered, as it became a centre of education for the clergy, scholars and intellectuals. The monastery was patron of the renowned School of Tsaritsani and possessed rare documents, which are now kept in the Monastery of Virgin Mary Olympiotissa in Elassona. Greek rebels found refuge in the monastery during the Greek Revolution of 1821 and later during the German occupation. The monastery is situated at a distance of 28km from Elassona and 65km from Larissa. To get there by car from Elassona, you follow the road to Kozani and then the road to Katerini, which turns right to the villages of Olympiada and Sparmos. 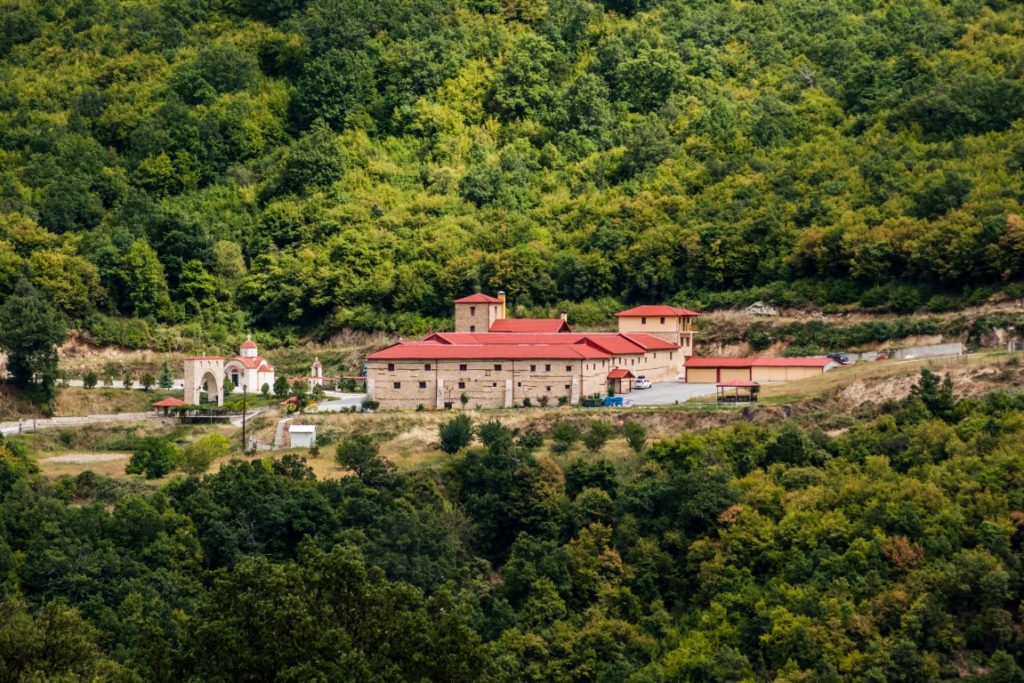 At an altitude of 820m, near Leivithra, at a distance of 5km from the village of Karya and 19km from Leptokarya, lies the holy stavropegial monastery of the Nativity of the Theotokos. The monastery is situated in the densely forested Zilniana gorge and has a magnificent view of the sea. It is known as the Holy Monastery Kanalon, due to the varied terrain of the gorge, which divides Olympus from Kato Olympus. According to tradition, it was founded by two monks, Damianus and Joachim, during the 11th century and it prospered during the 17th century. The Catholicon of the Monastery dates back to 1883. Now restored, the holy monastery houses a female monastic community belonging to the Holy Metropolis of Elassona. It celebrates on the 8th of September. 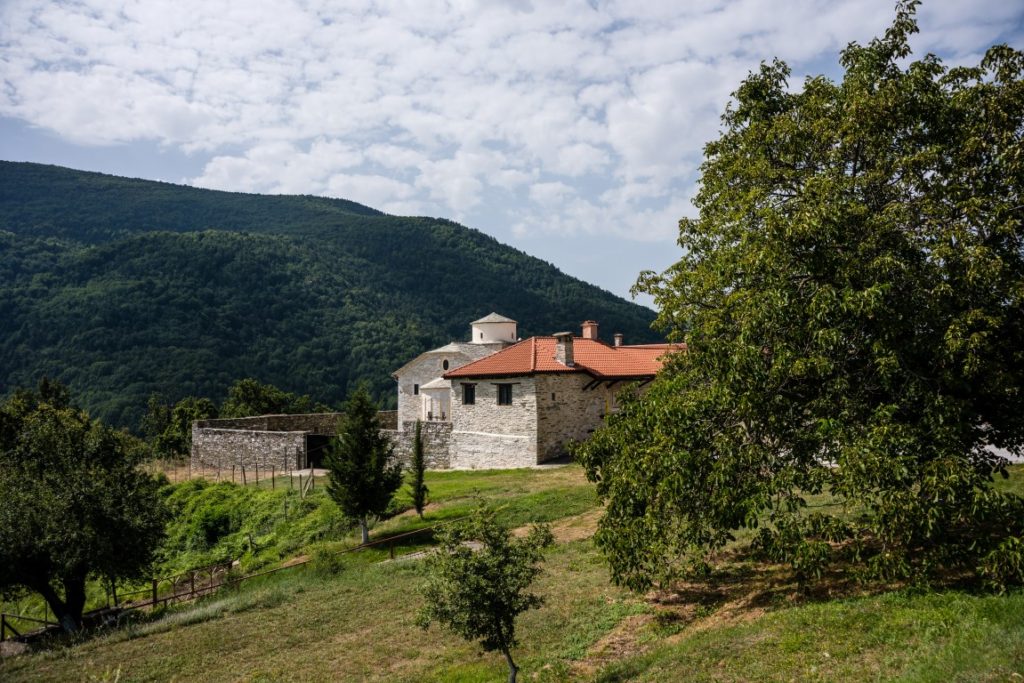 The Holy Monastery of Petra is situated on the northern side of mountain Olympus, at an altitude of 430m, outside the small village of Petra. It is considered one of the most important religious and historical sights of Greece. The monastery was founded during the 12th century and its old Catholicon was dedicated to the Entrance of the Theotokos. The current Catholicon dates back to the 18th century. In 1902, the Ecumenical Partriarchate declared the monastery as Patriarchal and Stavropegial and in August 1903 the Patriarchal sigillium was issued.

During the Turkish domination the monastery was a centre of the Revolution of Olympus and Pieria and served as refuge for many renowned Greek fighters such as Giorgakis Olympios and the Lazos brothers.

Built on the foothills of mountain Olympus, at an altitude of 1320m and 7,5km north of the village of Karya, lies the Monastery of the Holy Trinity, also known as "Palaiomonastiro", which was founded by the Saint and Martyr Eleftherios Klimentos. It is believed that the monastery was founded in 1640, though other references date it back to the 12th century. The monastery possessed significant agricultural and forestial land, watermills etc. and employed the local population.

During the Turkish domination, it ran as a secret school, also maintaining a great library. It was an important spiritual centre with financial power and played a great part in the fight for freedom from the Turkish conquerors. On Christmas Day 1833, the monastery was destroyed by a fire caused by a monk named Evgenios. The monks moved to Metohi, which is situated in Karya. A chapel was built on the location of the old monastery in 1913, which remains standing to the present day.

The churches of mount Olympus are of significant importance, due to their unique history and the marvelous natural landscape that surrounds them.

This church, at an altitude of 2.800m, is the highest church in the Balkans and is located on the homonymous peak of Olympus, on the Muses plateau.
It was built by Saint Dionysius during the 16th century and is now restored.
It lies in a 10 minute walking distance from the Greek Hiking Association shelter and the view from there is amazing. 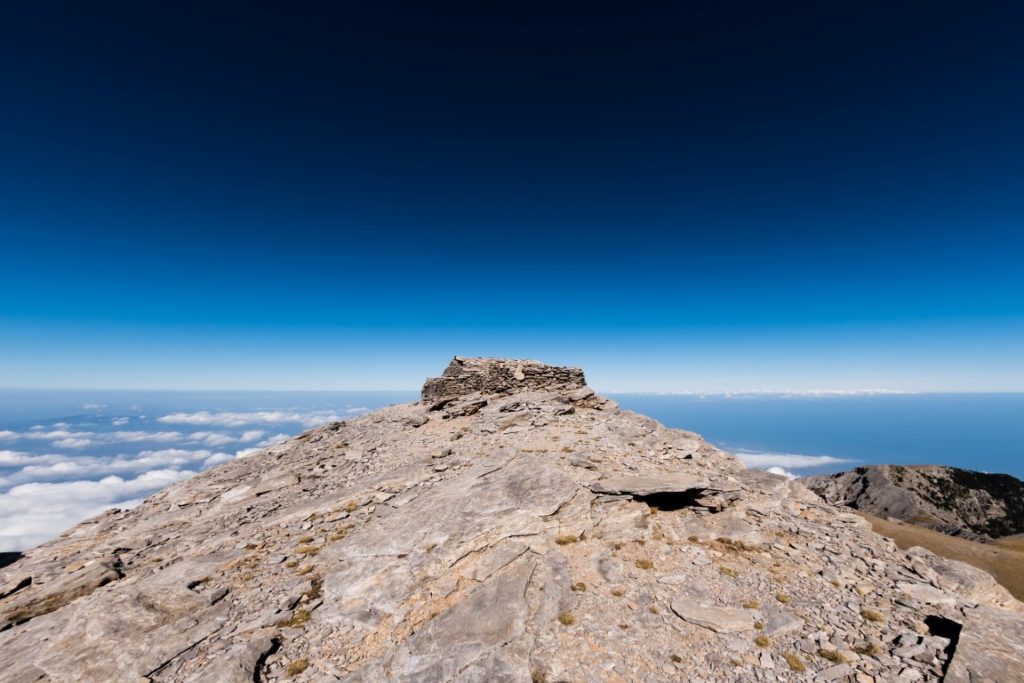 On the northern foothills of Olympus, near old Vrodou, into the wooded gorge of Agia Kori and at an altitude of 300m, lies the homonymous church.
Legend has it, that a beautiful girl, after refusing to enter the harem of a local Turkish landlord, found refuge in the gorges of mountain Olympus and died of hardship. A 173-step path goes downhill through one of the most impressive gorges of Olympus. Today, in the place where the relic of Agia Kori was found, there is a small church and holy water. The scenery is magical and mysterious. 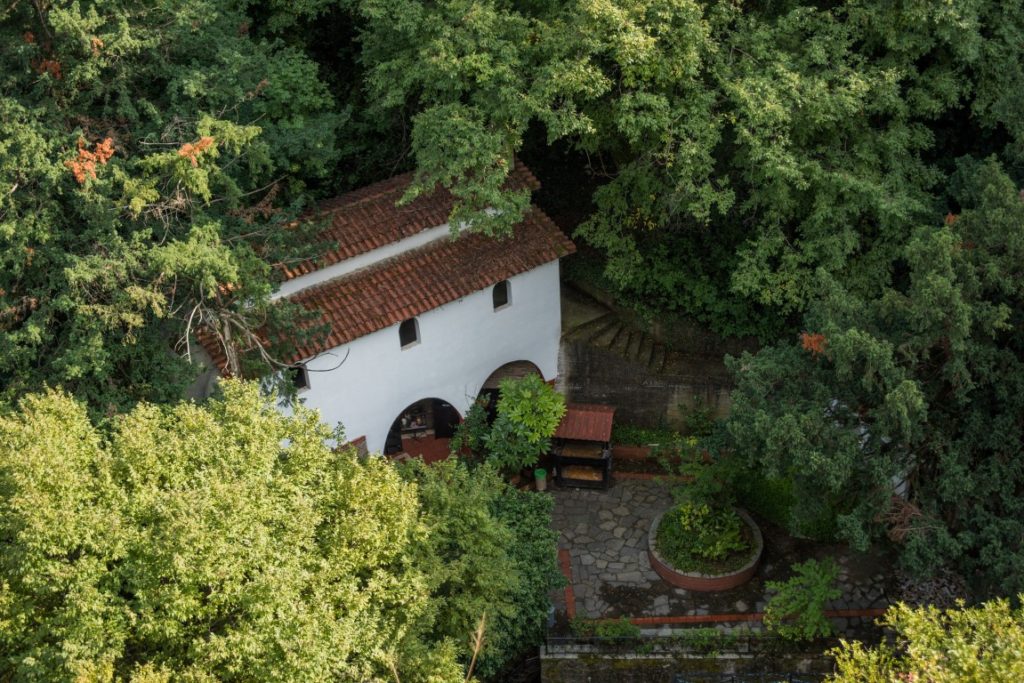 At a distance of 4 km from Old Vrodou and at an altitude of 400m, on a steep cliff, with a view of the green banks of the stream of Papas, lies the picturesque church of the Agia Triada. This is what has remained from the homonymous monastery of the 14th century.
It’s one of the most typical sights of mountain Olympus. 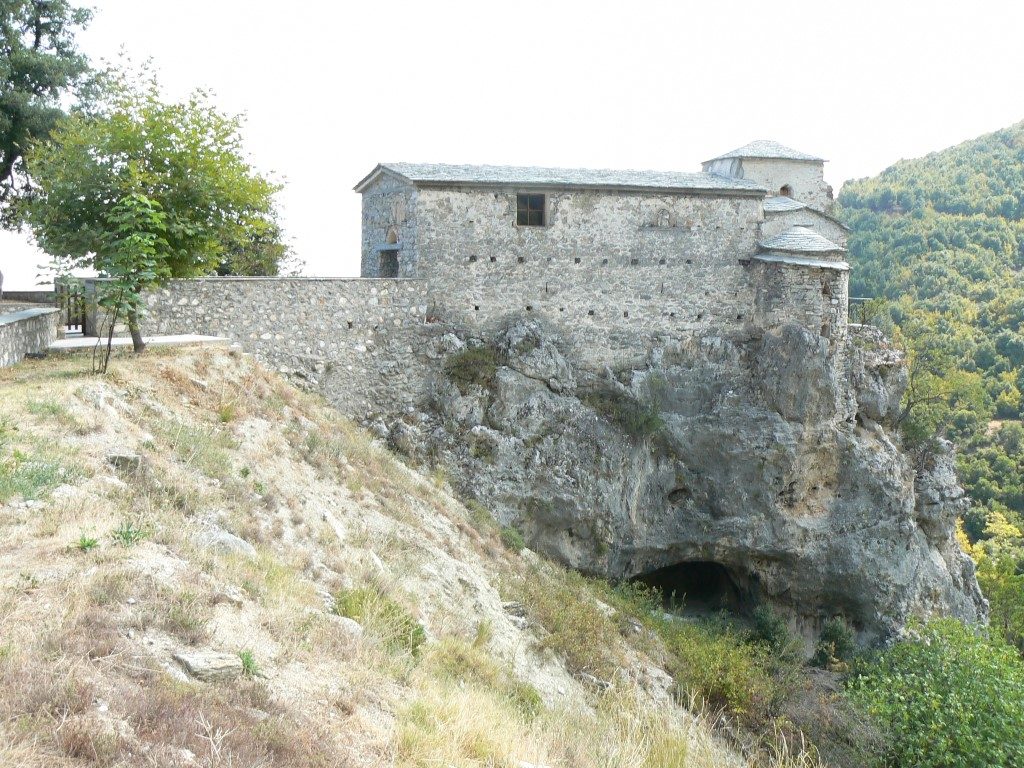 The church is located near old Vrodou. It was built around 1700 and was renovated in 1879. It is a well-preserved, stone–built church with a wood carved templon. The church has been declared as a heritage monument. There is also an area for leisure activities around it. 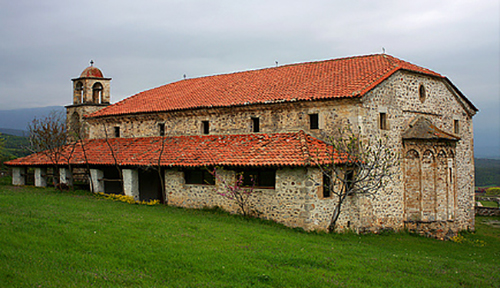 At a distance of 3km from Litochoro, in the middle of a clearing in the fir forest, the beautiful church of Saint John the Theologian is located. There is a leisure area as well. 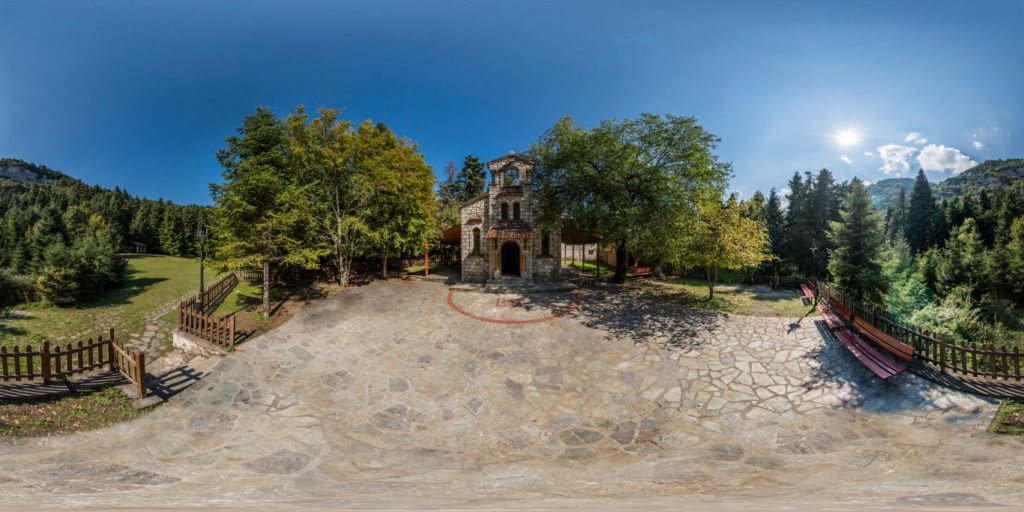 It is a small church which lies right above Litochoro, at an altitude of 440m and offers a marvelous view of the peaks of Olympus. 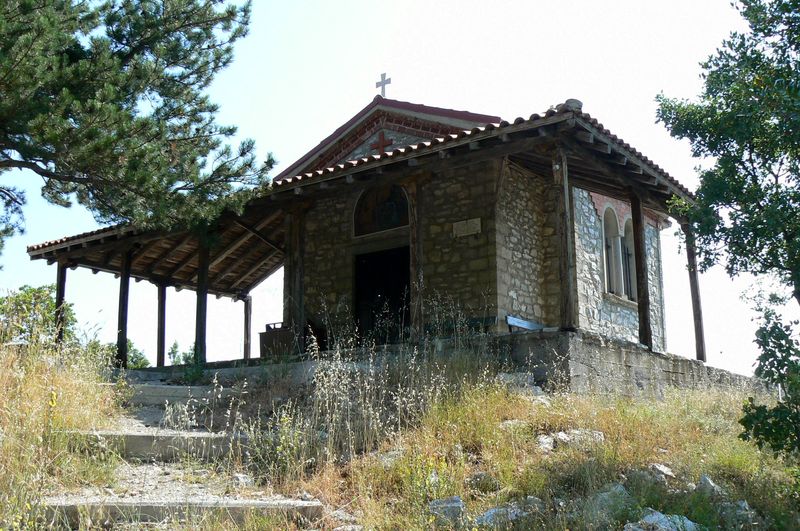 It is a small church which is located at the entrance of mountain Olympus, at the homonymous location Agioi Apostoloi. 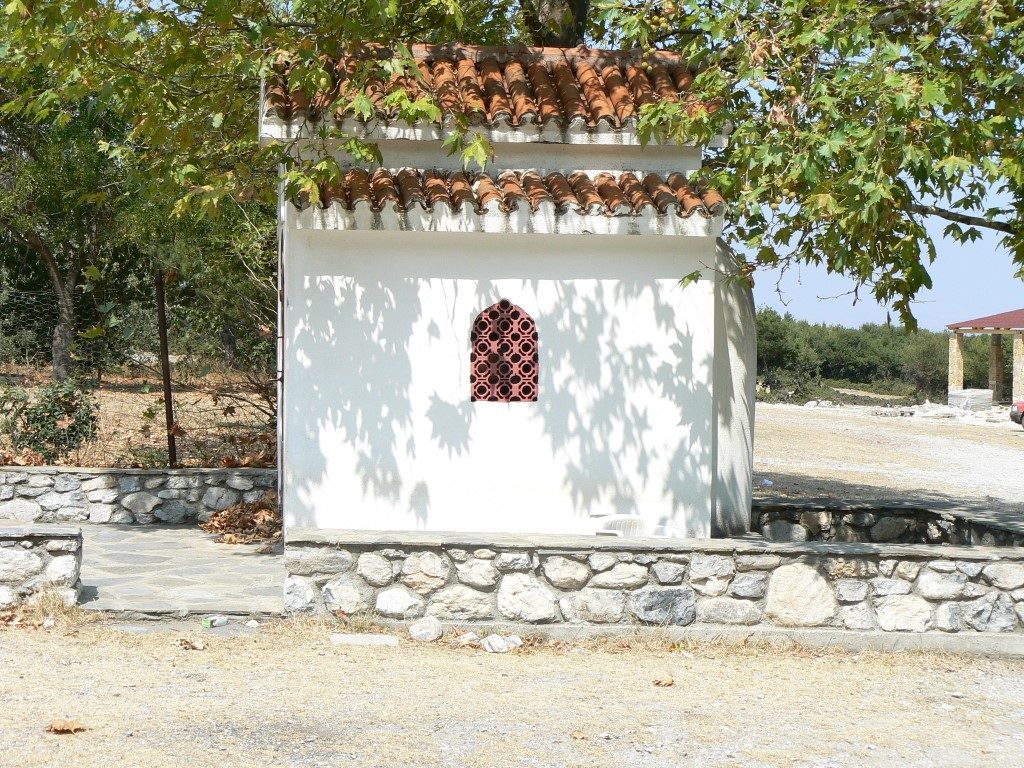 A church which is located at a distance of 5km from Dion, near the stream of Orlia and at the beginning of the hiking trail to “Coromilia – Petrostrounga”. 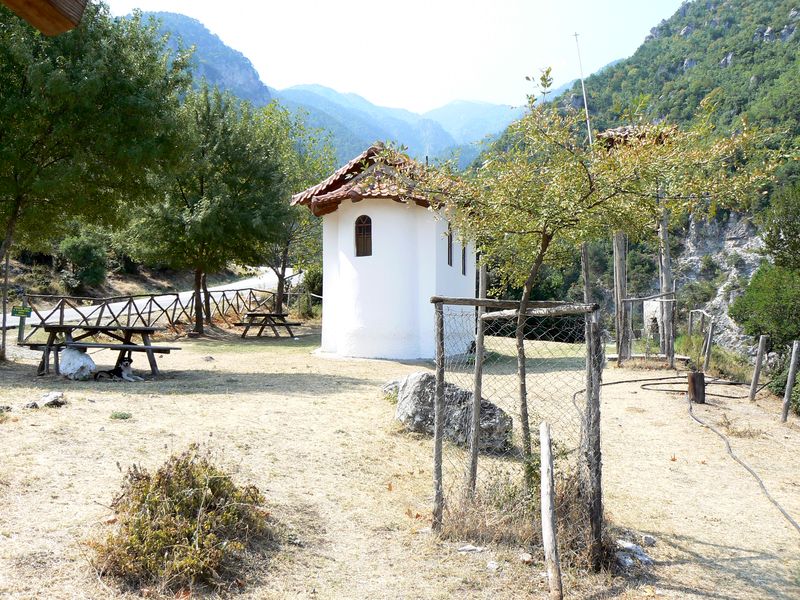 Churches which are located on the northern side of mountain Olympus. The Agia Triada church, in old Karya, was built in the 16th century and has notable frescoes. Agios Nectarios is a single-room, stone–built church with a bell tower. The church was built with the help of the villagers of Karya and the inauguration took place in 1971.

Virgin Mary is a church of Karya, dedicated to the Assumption of Theotokos. It was built on the same place where an old monastery was located, which was destroyed due to unknown reasons, probably in the 12th or 13th century, or when the Latins settled in Thessaly. A miraculous icon of the Virgin Mary was found on the spot, which is kept today in the Holy Monastery of the Virgin Mary Olympiotissa in Elassona, which it was named after. The church celebrates on 23rd of August.

The church lies on the northern side of the foothills of Olympus, besides the stream of Orlia and it is 5km away from Karitsa.

Churches on the east side of mountain Olympus.

Churches in Kokkinopilos. The church of Agios Athanasios is a basilica with a carved, wooden templon.